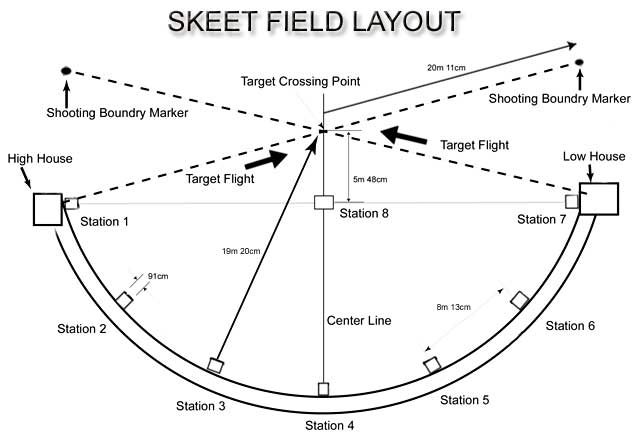 A Round of Skeet
A round of skeet consists of 25 targets, with 17 shot as singles and 8 as doubles. The first miss is repeated immediately and is called an option. If no targets are missed during the round, the last or 25th target is shot at the last station, low house 8. The shooting sequence is as follows:

Any gauge shotgun may be used, of any type, as long as it can fire at least two shots. The preferred shot size is #9, but nothing larger than 7-1/2 should ever be used. Since strength is not a factor, women are able to compete equally with men. Left handed shooters do just as well as right.

Shooting a Practice Round of Skeet
You’ll need to take the following equipment to the field with you:
Shotgun – any gauge, any type, as long as it fires at least two (2) shells
Ammunition – One box of 25 shells, same gauge as your gun
A shell holder you wear to carry your ammo as you move around the field
Ear Plugs – MANDATORY
Eye Protection – MANDATORY